2012… The famous end of the world didn’t come to us at last. We are just a few days before may. For our second participation in the event “Les portes ouvertes” in Fontenay-sous-Bois, we wanted, Alexandra Berthomé / Ax-elle and I, something coming from only one inspiration. In 2011’s session, the graphic input came from her, so we decided I had to make the input this time. So I did it… I chose the “Frozen Dragon”, as it’s the water dragon’s year for chinese people. Just have to freeze it because of my viking gene library :). And a bit of texturing, trying to reach something near the fantastic Philippe Druillet graphic style. And I came with this: 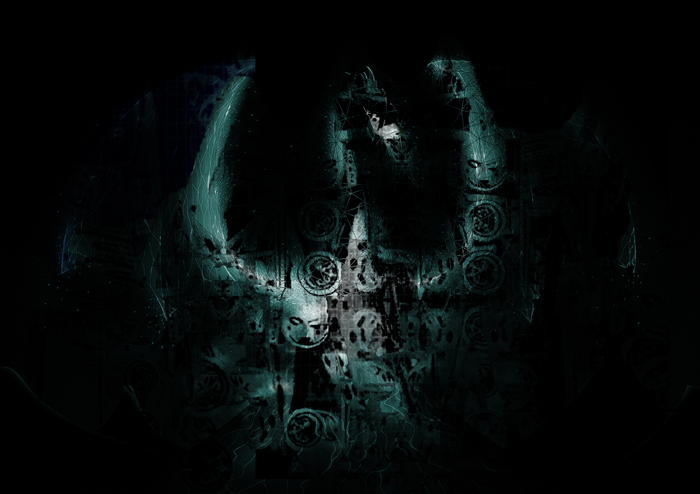 We used it for the exhibition flyer, and Alexandra reproduced it, making a large painting for a body integration.

To integrate the performance, I wanted to play with something more lively this time. That explains my choice in term of interactive participative device: this year, it’s the famous Kinect. People should interact with us during the performance, using it in a quick dispositive mixing live music and graphic distorsion. Meanwhile I should dj with my ambient vynils, the very most experimental and minimalist ;]. For the audio brick, I used the AS3 Tonfall Audio Framework, by André Michelle. Setting first a little sequencer for the rythm. Then, I plugged a few samples of my own. Music was O.K!

And as if that wasn’t enough, my daughter, then aged 10, took my iPad. She participated, improvising with the excellent Bloom music application, designed by a certain Brian Eno.